I use Node-Red for a lot of things and I have recently wanted to send notifications via SMS instead of an email, and I wanted to be able to receive SMS messages as well. I have had issues with the email node. It doesn’t always send for me (I’m using Google’s SMTP) and I don’t have a loud email notification on my phone. Because tons of emails thats why. But text messages on my phone have a very loud notification. I also wanted to be able to send messages to my Node-Red server, doing that via email is cumbersome. So texting it is. Plus sending/receiving an SMS is way cooler than a boring email. I know I can send texts to my phone via email (on most carriers) but that still requires using email and the email node. Don’t want to.

Enter Twilio. I have used Twilio before in the past with their free service tier and never got around to actually using it. The free service lets you do all the same stuff (I think) as the paid service but all the texts have a “This message was sent by Twilio – ” tag attached before every message. So I think thats why I never used it. Well I looked into it again and this time I just upgraded my account right away. Not fucking around. I just threw down $20 bucks. You buy a phone number for $1 per month and then you pay for all the messages you send. The cost per message (at this time) is somewhere around $0.0075 cents! Sweet! I figure I should be able to get a years worth of my number rental and a few messages off that $20 bucks.

So lets use Node-Red to send and receive an SMS with Twilio, it’s why you’re here right? Not for my ramblings.

To send an SMS from Node-Red is dead simple. Just install the Twilio node. It gives you a new output node. Just send you data to the node and off the SMS goes.

To be able to receive a message from Twilio your Node-Red needs to be accessible from the outside world. Twilio needs to be able to see the XML we are going to generate. In my searches for doing this I got a fucking headache. I found a few blogs out there with info on this but nothing concrete. It was actually pretty simple, at least for me. I have also already done this before in a previous post. I happen to run Apache for my web server, which is already setup and open to the world, DNS already setup. All I had to do was create a subdomain (not required) and point a the new vhost to my Node-Red server/install (via ProxyPass). Once this was done Twilio could access my Node-Red served pages. I also have (but I don’t think is required?) SSL already setup. I used Let’s Encrypt on my Apache server. However you do it is fine, you just need to be able to see at least 1-2 Node-Red generated pages from the web. I honestly found this to be one of the more pain in the ass tasks to deal with. Good luck.

The switch node checks msg.Body with   msg.req.query.Body for an incoming command. If the switch matches a command it routes it to a function node. If it matches a command it also checks that command for an ON or OFF and outputs the results as a 1 or 0 for you to do with what you like. So you would text your Twilio number “mySwitch on” or “mySwitch off” and bam! Otherwise it passes it off to a different function node to process the message further. That node checks the incoming message for a global. By this I mean you text your Twilio number “read mySensor” and this function node sees the “read” command and then checks for a sensor name (mySensor). It matches this name against a global you have saved and spits back the results after being XML’d. So when you text “read mySensor” it checks the mySensor global and texts you back with “mySensor: yourvalue”. Awesome.

Tip: the switch node is case sensitive, so be careful. The function nodes change everything to caps I assume to simplify stuff I dunno. I didn’t write it. Also when you change the sensor name make sure to edit the substr to match the character limit of your sensor name. Example: WEMO would be 4, MYSWITCH is 8 characters. Same thing if you change the READ query.

Here’s the flow, I included a testing global for you as well:

This is where I got the information on the Twilio node (from the creator it seems) and how to receive messages. But I found it about as clear as mud. (Note: the json2xml node doesn’t exist anymore. Just use the XML node now.)
http://blog.thiseldo.co.uk/?p=1090

Here is the original flow on flows.node.red.org, but its a little outdated.
http://flows.nodered.org/flow/d65e0c5e4f5fef767be2 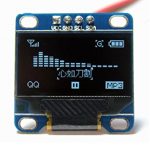 It took me about a week to get this going. There are still a few kinks that need to be ironed out, or worked around. But I wanted to get this out there before I forgot about it. I could not find a sketch for using an Arduino or ESP with an OLED and MQTT. Not one that didn’t just display data from a connected sensor., that is not what I wanted. I wanted to be able to send messages to the OLED screen via MQTT. I spent quite a while looking for it and I couldn’t find anything. About a week or two ago I finally broke the wall that was keeping me from sending and receiving MQTT message on an ESP. So I took that code and the working code from the Adafruit OLED sketch and made a baby.

I was able to produce a sketch that will simply display any text received via MQTT. Perfect. I plan on using this cobbled together with Node-Red. That way I can have one screen and send multiple sensor readings to it with minimal coding and parts. There are a few things I still need to figure out. For example I can’t get the screen to clear. Perhaps thats what the OLED reset pin was for? But my OLED only has four pins; SDA, SCL, Vcc and Ground. No reset. What to do? I think that is actually the only thing I need to work out. The Adafruit code will wrap your text to new lines, so make a note of that. I have gotten around clearing the screen by injecting spaces via MQTT. Its a little more effort in Node-Red for now until I get that down. But it works. It doesn’t matter how you get there as long as you get there right?

I Program the ESP via the Arduino IDE, if you don’t know how to set that up take a stroll down Google lane. Tons of help there on that topic. As it stands in the code below, once powered up the OLED should flash the Adafruit logo until a message is received then it will display the message until a new one is received. Simple. The default topic is “inTopic”, and the default OLED font size is 1. I have tried a font size of 2 but no higher. I also stumbled upon this library here. Much smaller and designed just for text. May try that in the future, but if it ain’t broke don’t fix it.

This was the tutorial that helped me get what I have going. I couldn’t get the OLED to work quite right until I came across this post. I used it as the base for what I have.
http://randomnerdtutorials.com/guide-for-oled-display-with-arduino/

This page helped but not until I specified the SDA, SCL pins for the ESP. I couldn’t get the display to work properly and do what I wanted.
http://randomnerdtutorials.com/esp8266-0-96-inch-oled-display-with-arduino-ide/

And the code (below): [See the comments for updated code]
END_OF_DOCUMENT_TOKEN_TO_BE_REPLACED