Fucking mechanical keyboards. Damn it, how the hell did I end up down this cash burning rabbit hole? Mid-life crisis I guess? Most guys buy a hotrod and I end up with mechanical keyboards. My first foray into mech keyboards was when I bought the Keychron K8 TKL board which I posted about last year. I kept that board for about six months before I gave it to my son. It was a good board don’t get me wrong, I liked it and there is nothing wrong with it but I also had no idea what I wanted in a mechanical keyboard at the time either. The biggest reason I replaced the Keychron was because it was not programmable with QMK or VIA/VIAL.

After getting into and reading about boards this turns out to be a must have for me. So I got a drop CTRL TKL board. This was pretty pricey I will have to admit. More than it should be considering what it is and what other keyboards out-there offer and go for in the custom keyboard world. From what I can tell the Drop CTRL is looked down upon not necessarily because it is a bad board but because it is a mass produced board and ready to buy at any time – in stock. It also has a RGB ring around the edges and after being in the community for a month or so you find out real quick that RGB is pretty hated in the group. Only newcomers in the group like RGB or gamers. Real mechanical keyboard enthusiasts don’t rock RGB and real high end boards don’t rock RGB either. I will have to admit that after a few months of using Crystal pudding keycaps with RGB on 24/7 I don’t really need it anymore. I got my fill of RGB. I also now know the difference and the reasoning behind north vs south facing RGB lights as well.

Note: For the majority of this post I will be referring to the Drop CTRL keyboard

QMK is pretty much “The Holy Grail of keyboard customization as someone else said. QMK usually offers tons of features like layers, custom keymaps, and the ability to edit your LEDs RGB patterns. It typically runs on Atmel controllers (Arduinos) which are used to power most custom keyboards it seems. QMK can be a pain to work with cause of editing keymap files and complex RGB patterns. It can be complicated and I think it has a steep learning curve that would drive away most users. This is where VIA/VIAL come in. VIA is a feature in QMK that lets you change your keymap on your keyboard without needing to reflash firmware, on the fly. QMK usually involves editing text and config files while VIA and VIAL are programs that run to allow you to edit the board. The changes you make using VIA/VIAL remain persistent on the keyboard, so even when you unplug and replug your keyboard back in, the keymap settings still remain. Some keyboards even allow you to use VIA/VIAL to edit the RGB color maps and patterns, although this feature seems to be few and far between. All QMK boards allow custom keymaps and multiple layers. The amount of layers you can have depends on the memory available on the board your keyboard is utilizing. From what I understand most QMK boards will ship with the amount of layers they support but sometimes you can add more.

END_OF_DOCUMENT_TOKEN_TO_BE_REPLACED

The title pretty much says it all. We were sitting in bed late one night and the wife yelled “Alexa, turn this shit off!”. Yet nothing happened. Well thats just not good enough. The next morning I opened Node-Red on the house server. I added a new Wemo Emulator node and named it “this shit”. I then connected the new node to the house lights via Hue nodes. Bam! Now whenever we yell at the echo “Alexa, turn this shit off!” you get greeted with “OK” and all the lights shut off! I couldn’t be happier. Now the wife laughs every night when I say it, go figure. 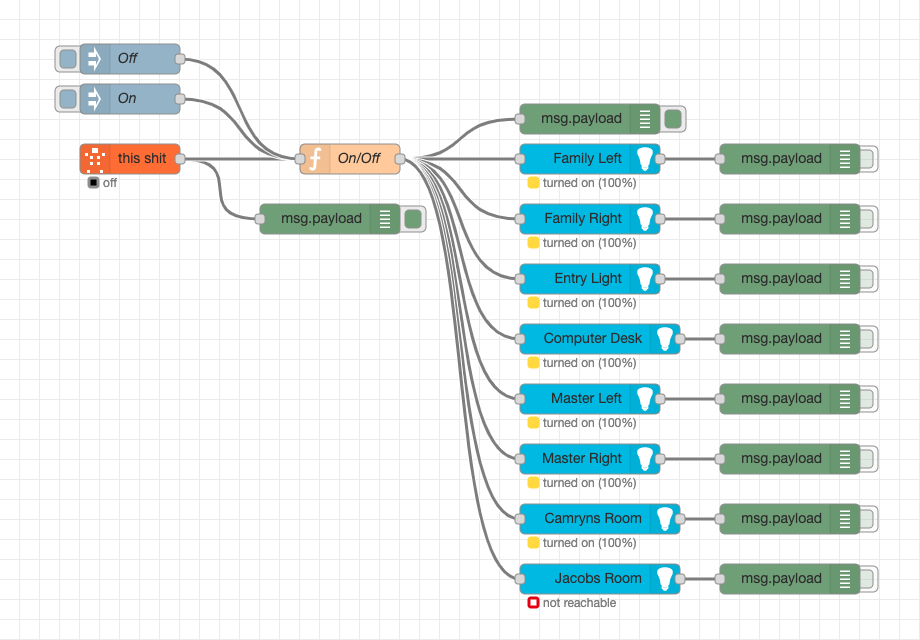 No fancy scripts needed, just install the Wemo Emulation node, and then connect it to whatever you want to control. Then tell Alexa to “discover devices” and you should be set.