So I made the jump and upgraded a bunch of shit. I did it for smoother bottom first layer prints (because of the glass) and hopefully no more curling issues. I upgraded to the “Anycubic Ultrabase 3D Printer Platform with Aluminum 12V/24V Dual Power MK3 Heatbed” and while I was at it I upgraded to the Gulfcoast Robotics Y-axis carriage too, as I have read it is wise to do both at the same time and the stock bed plate is usually warped from posts I come across constantly. In fact I went a step further and bought new 40mm and 80mm Noctua fans for the printer too! Happy upgrade day!

I am going to use the 40mm to replace the stock 40mm extruder cooling fan and the 80mm to replace the control box fan(s). I printed a new backplate for the printer. I dug through Thingiverse for a bit and chose one that looked like it had a following and worked well. After printing it I realized I should have maybe dug a little more, it was not easy to install. In fact I didn’t install all of the screws back on because I cannot get an allen wrench in there to do it. But it does the job, and man are those Noctua fans fucking quiet!! If it is sitting idle I cannot tell it is on, it is in my living room. I hear if you upgrade to TMC2130 drivers (with a RAMPS board) then it is this quiet while printing too. Damn!.

I decided to write this up real quick because when I searched for relative content I found shit on it. Searches for Anycubic turns up their printers, so searching for the bed/covering/plate was a pain in the ass. All I found was this. I ended up figuring it out as it’s not that hard but if i was able to read something on it first I probably would have saved my ass about 3-4 hours of head scratching.

This is where most of my frustration came from, the Y-axis carriage. Specifically the Y-belt. I did not have to remove the Y-rods, or even flip the printer over. All I required was access from above. I bought a new carriage from Gulfcoast Robotics (formerly ReRap Champion). Start by removing the heatbed. Undo your thumbwheels. Remove the bed, retain the springs for later. Now you should see the carriage. I have a Monoprice Maker Select v2.1 so I have four bearing blocks. Remove all the screws and the two in the center for the bracket. The plate should now lift off. This is prime time to adjust your belts if you gave never done so. I hadn’t so I did, which I would recommend. I printed out and used a belt tensioner from Thingiverse. This one seemed to be the simplest to use and printed very easily. I had made two just in case. The key thing to remember is that the belt connects on the bottom of the bracket. This will save you many headaches lol.

I used the tensioner at full open, installed the belt as tight as I could, then tightened. Bam like a bass string! Installing/tightening the belt was way easier than I was fearing it was going to be. A lot of people flex and say just use zip-ties but that means you aren’t getting it as tight as you possibly could and/or you’re yanking the hell out of the machine. I opted for the tensioner. Again, make sure the belt is installed on the bottom of the bracket (bottom rung of the belt is connected not the top). If you get that part backwards two things will happen. Your tensioner will rub together cause they’re too close and the Y-axis will home the wrong direction. So don’t do it.

(This could be the time to install new bearings) Install the carriage back on the bearings and then screw in the belt bracket. This lets you test the sliding of the bed/bearings before adding the pressure of the stepper motor. Make sure your bed rolls smoothly. I installed two screws per bearing at a time then adjusted as needed. It went real quick and simple. When I did this the first time I mounted the Y-axis bracket wrong with the belt on top and had rubbing issues as well as negative homing on the bed. Had to strip it and start over. On to the bed. 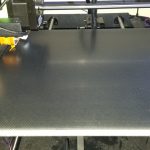 If you are rocking a new Anycubic Ultrabase you will need to install the bed components yourself. Should have a bag of screws/nuts/washers and a glass plate with a heated bed plate. The screws are special and are designed to tap into the bedplate. I used a 5.5mm driver with my fingers to tighten them all down flat. It goes screw into the bed, washer then nut. The washer should be big enough to keep your springs from digging into the bed. If not I would get bigger washers. Then add your springs (and spring cups?) to the screws and install over the Y-carriage. Tighten down your custom finger friendly thumbwheels. Remove the protective film on the heatbed, and on the glass plate. Align carefully and place down firmly. Heat and level (if you can). Move on.

The wiring was the simplest part. Remove and replace like for like wiring in the box. Heatbed power positive and negative (into your MOSFET!). And the bed temp sensor to the Melzi board. The only pain was that it is much shorter wiring than the stock bed. I did however cut about 10: from the stock bed sensor wiring and soldered it to the Anycubic to extend it (and use the default plug). I did NOT extend the heatbed wiring as I believe that to be a bad idea.

The 40mm and the 80mm Fan Backplate 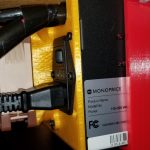 I decided to install some new fans on the printer to quiet it down. The stock fans make a horrible ass buzzing noise on start up that takes forever to go away, and they run loud. Cheap Chinese fans. I went with some Noctua fans to see what the hype is all about and holyshit! The packaging is top notch (although ship it in bubble wrap and save me $5 instead please) and the fans are freaking quiet!! I’m sold from here out. They weren’t cheap as small fans go ($13-15) but they’re worth it. Nice wiring, lots of adapters, even more low-level noise adapters too (kicks down RPMs) and they have rubber ends.

I installed a 40mm (NF-A4x10 FLX 40x10mm) on the extruder coldend for the cooling block. I had already added oil once before to the stock fan to quiet it down, now it was time to ditch it completely. The Noctua fits but does not go on super easily, a bit of elbow grease is required to get the screws all the way in to engage the threads. But it does fit. Make sure you check the fan alignment before install, only one side is recessed (the proper side). The cable plugged directly into the stock fan plug with no issues. Done. Bliss to come. 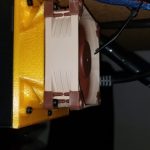 I installed an 80mm Noctua fan (NF-A8 FLX) onto a new previously printed backplate. The plate prints in two pieces and assembly is a pain, but it is a nice addition and I would do it again. Here is the backplate link, I printed the remixed version (no supports). This process required the removal of the bottom and back of the control box (to install new heatbed wiring and backplate/fan). Remember the bottom plate doesn’t require all the screws removed (four are for the power supply) and that the plate must slide towards the back then it pops out.

After it is all removed install the 80mm fan to the bracket first. I had to drill out the holes a little to get the M3s to fit, the fit through the backplate no issues. I believe I used 6mm or 8mm (thinking 8mm) M3 screws, the stock ones were too short. After the fan (choose your direction wisely) is installed you can screw it to the backplate, this requires nuts on the back (5.5mm wrench). I fed the wiring for the fan through and plugged it into the stock adapter with no issues, and the cable was plenty long enough no adapters needed. Tape them together.

Then I carefully crammed all the wiring back inside and slid the bottom plate back on and screwed it down. Arrange the wiring to come out of the proper side of the plate and cram it down (safely). Then add the screws to the backplate. This is were I got cheap, I couldn’t get my fingers or a wrench in there to fill all of the screw holes and theres no way to put the backplate on first then bottom plate. So I had to scrimp on screws. Although it feels like it is on there just fine, no bulging or anything. I would do it again all said and done. 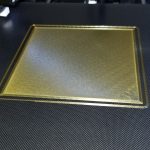 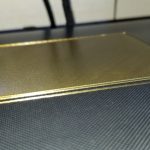 I am very happy with the results at first, time will tell from here on out. My first print came out partially great, after tweaking the leveling on the bed a bit I got the best first layer I have ever had. I even upped all the printing speeds! I test printed a first layer test piece to check leveling. Printed it twice, first for adjustments and the second was almost 100% perfect. After cooling the print literally just popped off with my finger. I feel like heating was a hair slower than the stock bed. But so worth it (the bed can also be converted to 24v). So glad I did all these upgrades.

TLDR; 1) Make sure you install the Y-axis carriage belts the proper way, with the belts connecting on the bottom of the Y-axis bracket. If you end up placing them on top your bed will be backwards and will home the wrong direction. 2) The Anycubic heatbed has really short wiring (WTF guys!?) so you are going to lose about 6″ of distance. 3) The endstop wiring is even shorter, you can use this as is and sacrifice the distance or do what I did and cut and soldered the old endstop wires on to make it longer. I did NOT extend the headbed wiring. 4) The screws that come with the bed are a bit longer, a lot of people say they cut them but I found no reason to, they fit just fine.